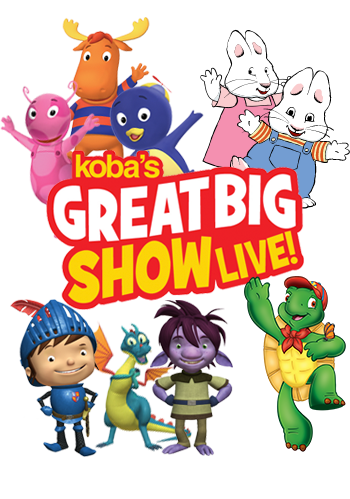 Join the party of the year with all of your most cherished characters! Koba Entertainment is proud to bring families across Canada Koba's Great Big Show starring The Backyardigans, Max & Ruby, Franklin, and Mike the Knight. In this unforgettable live stage experience, Koba's Great Big Show Live! delivers inventive musical storylines that showcase over 25 larger than life characters, 25 highly crafted costumes, and 25 original interactive songs!

This exciting musical mix features the highpoints of Koba’s most popular productions. The imaginative Backyardigans travel from the frozen north to the sunny seas and home again just in time for a snack! Hilarious results arise when everybody’s favourite bunny siblings Max & Ruby encounter some strange party guests! Have fun playing riddles and rhymes with Franklin and his woodland pals, then join the chivalrous Mike the Knight and his friends as they adventure in the magical land of Glendragon.

Koba's Great Big Show Live! celebrates Koba’s history of producing quality family entertainment for a global audience. Memories abound as each moment is filled with exciting song and dance numbers perfect for fan of any age!

Max is a three-and-a-half-year old bundle of bunny energy. Max doesn’t talk a lot or go to school yet, but that doesn’t stop him from turning the tables on Ruby and cheerfully getting his way. Max loves his sister but will never do something just because she wants him to.

Ruby is a seven-year-old bunny. She is very smart and extremely organized. She is a second-grader who loves being in charge and believes she is the perfect bunny to help her little brother Max grow up right. She adores her brother.

I’m a knight-in-training! I go on a mission every day with my dragons Sparkie and Squirt. I ride my speedy horse Galahad all over the kingdom on adventures! Sometimes I make mistakes along the way but whenever that happens then it’s time to be a knight and do it right, and I fix everything up.

I am one of Mike’s dragon friends. I’m the small one who can breathe water. Not every dragon can do that! Oh! And I can fly, which comes in handy on Mike’s missions but I don’t like to fly too far away from Mike and Sparkie.

Being a troll is a fun life – I live in a cave with my Ma and my Pa. We sing, cook, play tag in the caves and love to look for food in the Tall Tree Woods! Sometimes, I get to practice knightly things with Mike in the arena and I even get to go on a few missions. Mike is a good friend.

Pablo is an energetic and enthusiastic penguin. Sometimes his excitement can overwhelm him–making him the character most likely to run in a circle flapping his flippers. He may not be the most agile or graceful of the friends, but he’s probably the most determined and enthusiastic.

Uniqua is a one-of-a-kind character with an adventurous nature. With her purple skin, pink spots and dainty antennae, she doesn’t look like any other creature on the planet. She is sweet and graceful, but she can also be funny, a little mischievous and quite the daredevil.

Tyrone is an easy-going, sensible young moose, who is also Pablo’s best friend. Tyrone is a deep thinker, which may make him seem a master of the obvious sometimes. But he always enjoys a challenge because he knows, in his heart, that he is equal to it and he’ll find a way to figure it out.

Franklin is fun-loving and a great friend to everyone he meets. He’s kind, considerate and he’s always there to lend a hand or a sympathetic ear. Even though he sometimes struggles to do the right thing, Franklin can always rely on his parents and friends to help him find the right path!