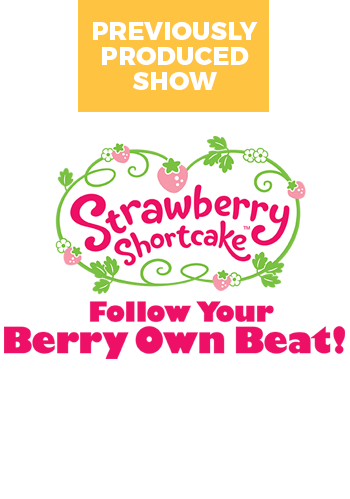 But Strawberry Shortcake and the girls weren’t the only ones stepping into the limelight – the exciting musical adventure introduced the happy-go-lucky Huckleberry Pie live-on-stage for the very first time!

Adventure abounded as audiences entered the whimsical land of Berry Bitty City where the whole town was buzzing with anticipation for the Glitzy Glaze Talent Show! Fans sang and danced with Strawberry Shortcake and friends as they prepared for their moment in the spotlight, but not without some misguided mishaps along the way.

This interactive concert experience was full of humour, fun and friendship.

ABOUT STRAWBERRY SHORTCAKE LIVE! ON STAGE

Previously produced by Koba Entertainment, Follow Your Berry Own Beat! is among the company’s roster of highly successful theatrical productions including The Backyardigans: Quest for the Extra Ordinary Aliens, Toopy and Binoo and the Marshmallow Moon and Franklin the Turtle!

The never-seen-before musical package brought together an award-winning team led by Koba’s artistic director Patti Caplette. The show featured new songs co-written by Lorelei Bachman and her father Randy Bachman (The Guess Who, Bachman-Turner Overdrive), plus original and fan favourite songs from the hit television program. Scenic design and productions were created by F&D Scene Changes Ltd., whose resume included past Broadway shows such as Wicked, Mary Poppins and Les Miserables.

Strawberry Shortcake is everybody’s berry best friend. When she’s not running her Berry Cafe in Berry Bitty City, she’s hosting get-togethers with her friends or offering them help and advice. Her optimism is contagious and she always sees big possibilities in everything – and everyone!

Cherry Jam is Berry Bitty City’s most famous new resident! When the singing superstar is offstage, her cheery charm helps her fit right in as the town’s favourite music teacher, voice coach and all-around fabulous friend!

Berry energetic, Orange Blossom is all about solving problems with a smile. She runs Berry Bitty City’s town market, Orange Mart – a little store that holds everything you could ever need. Orange loves being helpful and always puts everyone in a good mood!

Lemon Meringue is an expert with a comb and blow dryer. She runs the Lemon Salon, where girls, pets and garden friends alike all get their hair styled. Lemon is very fun to be around and loves to keep everyone up to date on what’s happening in Berry Bitty City.

Super stylish Raspberry Torte loves giving fashion advice to all the girls in Berry Bitty City. She even owns and runs Fresh Fasions, a berry trendy boutique. Raspberry’s friends know they can always count on her for the berry latest styles – and true friendship too!

Always on the move, Plum Pudding seems to hear a happy dance beat wherever she goes. She’s a great dancer who teaches everything from hip-hop to ballet at the Sweet Beats Studio. Plum’s kind heart and quirky ways make her a favourite friend in Berry Bitty City.

Blueberry Muffin is super smart and knows something about everything. She runs Berry Bitty City’s bookstore, Blueberry Books, and loves to read about how things work and grow. Her best buds know she’s always there for them – a true blue friend to the end.

Huckleberry Pie is a happy-go-lucky boy from Berry Big City who runs a dog shelter. Huck’s friendship with Strawberry and the other girls and his talent for matching the perfect pup to the right friend go a long way toward boosting his confidence.

STRAWBERRY SHORTCAKE™ and related trademarks © 2017 Those Characters From Cleveland, Inc. Used under license by Koba Entertainment. American Greetings with rose logo is a trademark of AGC, LLC.