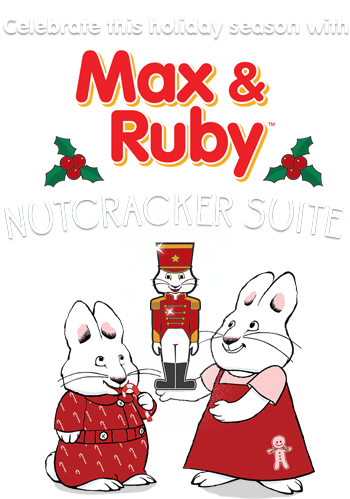 Max & Ruby bring to life a wonderful tradition this holiday season as they take to the stage their most magical performance yet! Inspired by one of the greatest musical scores ever composed – Tchaikovsky’s Nutcracker Suite – the beloved bunny siblings star in Koba Entertainment’s musical production Max & Ruby in the Nutcracker Suite.

It’s Christmas Eve, and Ruby is busy trimming the tree, while Max is chasing the delicious scent of Grandma’s freshly baked gingerbread cookies! A knock at the door reveals a huge parcel from their Great Uncle Drosselmeyer. As the package is unwrapped, Ruby realizes that each new toy is from the story of the Nutcracker Ballet, including a Nutcracker doll!

As Grandma reads the story of the Nutcracker, their imaginations whisk them away to a magical land where they become characters in the beloved ballet. Dancing, singing and delicious treats follow, as the bunny pair experiences the wonder and excitement of the classic Nutcracker story. Whether it was the sweets, or their lively imaginations, the bunny siblings head off to bed with visions of candy canes dancing in their heads!

Max & Ruby’s adventure, guided by the classic notes of Tchaikovsky’s masterpiece, is full of delectable dance and holiday magic perfect for the whole family.

About Max & Ruby in the Nutcracker Suite

Max & Ruby in the Nutcracker Suite is the newest live show produced by Koba Entertainment. The company’s roster of celebrated theatrical productions also includes Toopy and Binoo and the Marshmallow Moon and The Backyardigans: Quest for the Extra Ordinary Aliens.

Max & Ruby originated as an enchanting book series by Rosemary Wells, and has sold over 3 million books worldwide. Making their television debut in 2002, Max & Ruby’s playful high jinks are enjoyed by children around the world including Canada, U.S., Finland, France and Sweden.

Max is a three-and-a-half-year old bundle of bunny energy. He is physically fearless, cheerful, enthusiastic and stubborn. His will of iron is sometimes a source of frustration to his big sister Ruby. Max doesn’t talk a lot or go to school yet, but that doesn’t stop him from turning the tables on Ruby and cheerfully getting his way. Max loves his sister but will never do something just because she wants him to. Max loves trucks, rockets and mud. His favorite toy is his red rubber elephant.

Ruby is a seven-year-old bunny. She is very smart and extremely organized. She is a second-grader who loves being in charge and believes she is the perfect bunny to help her little brother Max grow up right. She may be bossy, but she’s patient and she adores her brother. Ruby never gets into trouble because she always follows the rules – she also loves making the rules. Ruby loves ice skating, shopping, talking to her friends on the phone and making delicious treats such as cakes and lemonade.

Grandma lives next door to Max and Ruby and is totally devoted to both of them. Grandma is full of surprises. No matter what the kids are into, Grandma is able to relate to them on their terms. Although Max never doubts that Grandma will understand just what he needs and when, Ruby often underestimates Grandma’s capacity for fun, and is surprised when Grandma dresses up like a vampire or approves of Max’s Earthworm Cake with Red Hot Marshmallow Squirters on it.