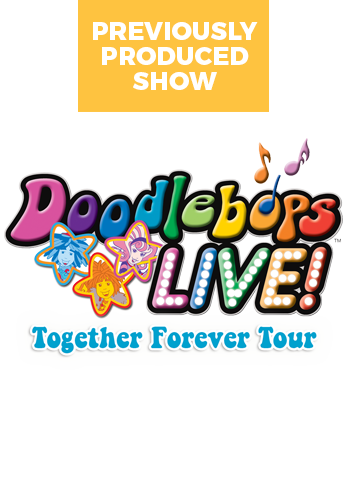 Doodlebops are the favourite rockin' band of kids aged 2 and up around the globe. Showing audiences what it takes to work together, have fun and be best friends, Deedee, Rooney and Moe Doodle have been taking the world by song since their US and Canadian television debut in 2005 on the Disney Channel and CBC. In addition to starring in three seasons of their hit television show - airing on CBC in Canada, Disney Channel in the U.S., Playhouse Disney in the UK, and expanding worldwide - this high-energy singing and dancing trio from Cookie Jar Entertainment has performed live in close to 200 cities, released multiple DVDs and soundtracks and launched their own toy line.

Previously produced show Doodlebops Live! Together Forever
Heeding the call of their legions of clamouring fans, Doodlebops commanded the stage in a high-energy, live concert tour that got their whole audience movin', groovin', laughin' and singin'. Doodlebops: Together Forever is a previously produced Koba Entertainment production that was created to appeal to audiences of all ages. Drawing on the success of the Doodlebops TV series from Cookie Jar Entertainment, this live stage show featured innovative giant screen technology, original sets and costumes, signature songs and reinforce positive social values.