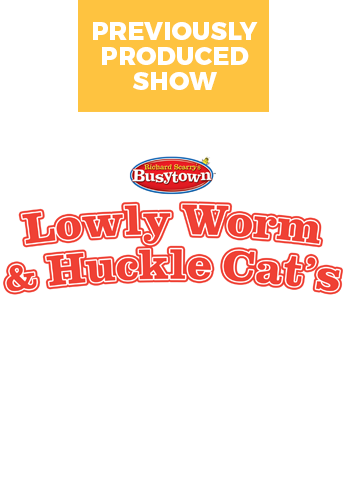 Previously produced show Lowly Worm & Huckle Cat: Busytown Busy was based on Richard Scarry’s catalogue of over 300 children’s books, which sold more than 150 million copies worldwide. Broadcasted on CBS (North America) and CBC (Canada), Busytown Mysteries features loveable characters and focuses on preschool problem solving and learning. Its delightful stories have been enjoyed by children in more than 80 countries around the world.

Lowly Worm & Huckle Cat: Busytown Busy captured the incredible world of Richard Scarry and followed the adventures of Huckle Cat, Sally Cat, Lowly Worm, Sergeant Murphy and many of their unforgettable friends. Busytown hosted a talent contest and everyone was buzzing with excitement. Together, the friends attempted to discover their true talents with lots of laughter – and only a few hiccups - along the way! With catchy sing-along songs and lots of audience interaction, Lowly Worm & Huckle Cat: Busytown Busy brought out the showman in us all!

Busytown Mysteries™ and all related and associated trademarks are owned by DHX Cookie Jar. And used under license from DHX Cookie Jar Inc.